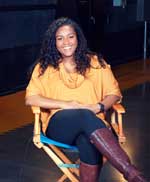 Angel Key '14 has always known she wanted to go into television news, but she thought she would be in front of the camera.

Then she landed an internship in the programming department with the No. 1 TV station in the country's No. 2 market. Her summer with KABC-TV in Los Angeles revealed her talent for producing, a talent she got to show off working on the shows "Visit LA" and "Eye on LA."

"I did the reporting, helped with the shooting. I had my own crew, did all of the research for the locations, met some pretty awesome people," says Key, who is from Laguna Hills, Calif.

She got to field produce six of her own segments of the entertainment news show "Eye on LA."

"The whole experience of trying differing things in the COMM department has allowed me to flourish in my internship - and I did flourish."

She got to hang out with world-class chefs and composers, interview famous actors and report from some of LA's hottest hot spots.

"It was pretty cool."

Key's next goal is to get into a good graduate school, possibly for broadcast journalism or public policy.

"I think I found my niche because of the COMM department and the political science classes I took."