Why did you pick the Communication Major? 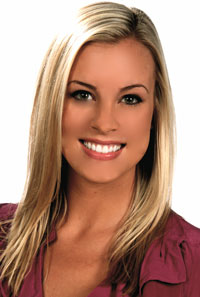 Before I came to CSB/SJU I knew I wanted to do something in the creative writing/journalism/public relations/marketing/production field. But wow, how would I ever choose the right path? Luckily, the Communication Major lets you dabble in a little of each and get a sneak peek into a few different areas of the field.

Once I really enjoyed a certain area, I focused on finding an internship to learn even more. After I took Dana Drazenovich's Advanced Media Writing (highly recommended), I decided to get a part time job at the St. Cloud Times Sports department and led the CSB/SJU's newspaper, the Record, as Editor in Chief. After touching on broadcasting in a few of my classes, I found myself as a KARE 11 morning show intern. I wanted to learn more!

What career have you chosen?
I really didn't "choose" my career. It chose me, and that is the best part about it. Let people know who you are and what you want. See where life takes you!  One minute I was about to graduate in St. Joe, Minn., and the next, I was working at Paramount Studios on the "Dr. Phil Show." After finishing Season 10, I am now a freelance casting associate producer. This means that I bounce to different shows. Once a show is cast and ready for production, I move on to the next one. Since the" Dr. Phil Show," I have cast national Walmart commercials, a new pilot on CBS, a new pilot on A&E and "Undercover Boss." My duties include extensive outreach, research, conducting interviews, pitching ideas and cast members to executives, and digging for amazing stories. I love working in the casting world, but one day I might want to go back into production.

What was the most valuable skill or information the Communication major gave you
Network. Do as many internships as you can. Network. Use LinkedIN. Network. Take advantage of social media outlets. Oh, and network.

How does the CSB/SJU Communications Department set you apart?
The CSB/SJU Communications department gave me the confidence to put myself out there and get what I wanted -- my dream job. While traveling to LA before I graduated from CSB/SJU, I met Dr. Phil and told him my dream was to one day work for him. He was a little taken aback, but the next thing I knew I was driving my car to Hollywood! I would have never gotten the courage to do this without taking these classes and realizing this was the path I wanted to take.