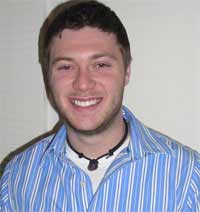 Michael Casper majored in Economics at St. John’s University. He grew up in the great state of North Dakota in a little town called Wahpeton. In high school Michael was active in football, basketball, track as well as being editor of the school paper. Here at St. John’s he was a member of the football team and SIFE. Michael is owner of TCDJ Mobile Entertainment which is a DJ company he and a friend created several years ago. He loves to travel all over the region DJing for different events.  Michael is proud to be a graduate of St. John’s University in the footsteps of his brother who graduated in ’06. Along with his brother, Michael also has two cousins who attend St. Bens, one of whom is in the Entrepreneur Scholar program. During the summer you can usually find Michael either at Ottertail Lake in Minnesota or riding his motorcycle around it. The biggest event for Michael each year is We-Fest which he never misses.