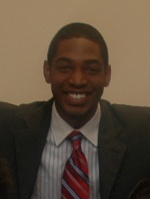 Barry Griffin graduated from  St. John’s University majoring in Political Science and International Business with a minor in Economics.  Born in Nassau, Bahamas, Barry first developed a keen interest in leadership and entrepreneurship in high school through the Junior Achievement Program where he was awarded a Most Distinguished Achiever Award. This interest in leadership and entrepreneurship became even more fervent as Barry entered college. Barry was an active member in his college community not only as a Senator on the Saint John’s Student Senate, but as Treasurer of the International Affairs Club and member of numerous campus boards and committees. Barry is an ardent traveler and has a zeal for learning about different cultures and languages.  His travels have brought him to England, France, Spain, Costa Rica, Nicaragua, Canada, China, Hong Kong and the United States.  Barry is particularly enthralled by the opportunity to bring his ideas to fruition through the Entrepreneur Scholar Program while simultaneously developing himself personally and professionally.  Fascinated by world politics and international affairs, Barry intends to one day pursue a political career in The Bahamas.