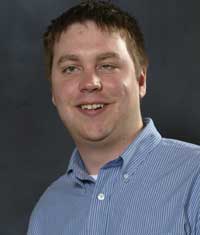 Matt graduated from Saint John's in 2008 majoring in political science with a minor in economics.  Matt was first touched by the entrepreneurial spirit during the summer after sixth grade when he started mowing lawns for neighbors, advertising door to door, and collecting some cash for his work.  He continued that business into his high school years when he passed it onto his younger brother.  While doing that he also started designing websites, first for fun, then for friends and before he knew it the word was out that he was good.