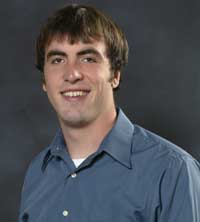 Jeffrey graduated from Saint John's in 2008 majoring in Management and Pre-medicine.  He grew up in the tiny town of Scandia Minnesota, along the St. Croix River and graduated from Forest Lake High School.  He worked with all of his relatives at the family landscaping business, Abrahamson Nurseries, which is how he became interested in entrepreneurship.  Jeffrey was involved in various small entrepreneurial ventures such as selling firewood and bittersweet with his younger brothers.  Jeffrey says, “From a very young age my father has instilled that idea of always looking for opportunity.”  He believes that the on-site experiences and meetings with successful entrepreneurs will be invaluable.  He is hoping to someday combine his management and entrepreneurial skills with a medical degree and open a family practice in the rural upper Midwest.  At St. John’s, Jeffrey was a member of the varsity swim team and is active in various intramurals and the water polo club.