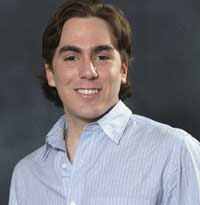 Eduardo majored in Economics from Saint John’s University. He was born in Guayaquil, Ecuador and attended Torremar School. Soccer is Eduardo’s favorite sport. He was captain of his high school team that won the national high school championship. Eduardo also enjoys mathematics, and represented Ecuador in the International Mathematical Olympiad in Washington 2001, Glasgow 2002, and Athens in 2004. He enjoys traveling and learning about the history of different countries and cultures. Eduardo graduated in the spring of 2009, and he is currently working in Miami, FL, on a Health Care project with a well known and recognized Latin American investor group. Eduardo will pursue at some point in the near future a Masters Degree that will help him prepare more in depth on a field, yet to be determined, in order to get the necessary expertise he requires to start his own project in the future.