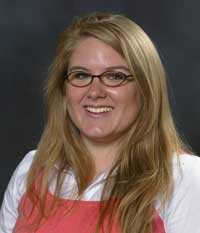 Tabitha is a member of the second cohort of Entrepreneur Scholars  She graduated in 2007 from the College of Saint Benedict majoring in sociology with a concentration in family studies. After graduation she worked at the Donald McNeely Center for Entrepreneurship for six months as the interim program coordinator.

During college she was employed as the volunteer coordinator at Kennedy Elementary Kidstop, and she was also very active in volunteering on campus and within the community.   She also enjoys spending time with her family and friends, the outdoors, the arts, clubs and events on campus, and has a particular hunger for travel.  In the summer of her sophomore year she participated in an internship with the New York Hotel and Motel Trades Council, in which she worked with Local 6 union members in Manhattan to prepare a campaign taking place in 2006.  In the summer of her junior year she worked as a sales person learning home based sales strategies.