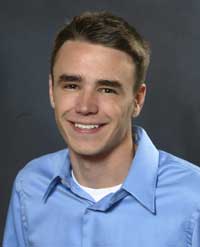 Blake majored in business management and a focus in Marketing at Saint John's University.  He is a second-generation Johnnie as well as a second-generation entrepreneur.  Blake draws much of creativity and innovation from his parents, who own two restaurants.  He believes there is a balance between work and personal life, and his motto is, “Work hard, Play hard.”  In high school, Blake was the captain of the soccer and tennis teams, and he earned All-state and All-conference honors in both.  Blake believes the discipline required of each sport is what has shaped his character.  He enjoys working as a team but respects and admires those who standout in individual work.  Blake was born in London, England and has always had a passion for travel and experience of different cultures.

Blake gained adaptability and direction through his time at Saint John’s University, and believes his education will open the door to the rest of his life as an entrepreneur.  He joined the Entrepreneur Scholars program because he believes it is the best path to his goals.

Blake was the Operation's Manager and the General Manager of Clemens Perk, the Entrepreneur Scholar started and run coffee shop on the campus of the College of Saint Benedict.  In those roles he oversaw all of the operations of the coffee shop and led the management team.  Blake was also on the Tennis team for St. John's.