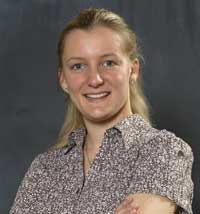 Alina Balonuskova majored with an individual major in International Finance and minored in Spanish. She was born and raised in Latvia, an Eastern European country that used to be a part of USSR and then regained its independence in 1991. Throughout her childhood, Alina was able to observe the change from planned economy to market economy. This was a time when a vast number of small businesses arose.  Being exposed to such an environment planted in Alina a goal of starting her own business venture someday.  Besides the interest in business, especially international, Alina is interested in learning different languages. She can speak Russian, Latvian, English, German, Spanish and a little Modern Greek. An important role in Alina’s life is volunteering and helping the others.

During the spring of her sophomore year she spent a week in the Dominican Republic volunteering at an orphanage. Alina hopes that someday she would be able to run an international company that would benefit ordinary people of developing countries, especially women and children.

Alina was the CFO of our student started student run coffee shop called Clemens Perk.  In that role she managed all of the accounts payable, budgeting and was on the management team with two other Entrepreneur Scholars.