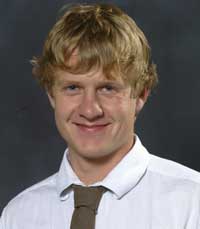 Aaron Hanson is a member of the second Entrepreneur Scholars cohort.  He majored in Environmental Studies at Saint John's University.  He grew up in a small rural town in southern Minnesota called Kasson-Mantorville.  He enjoys being outside whether camping, fishing or running.  In the winter, he can be found cross-country skiing or snowmobiling.

Aaron's interest in entrepreneurship started with the common kid business of a lemonade stand at the end of the street, and since then his keen interest in running a business has grown every year. In the fall of 2006, Aaron attended a study abroad program in India that focuses on sustainable communities.  During the summer of 2007 he interned at a green business consulting group based in Minneapolis. He hopes to bring his knowledge about environmental topics into the business world and someday start a “green” business.  For him, the Entrepreneur scholars program was a chance to bring some of his business ideas into reality.