The executor of Bruce Larsen's estate donated his extensive collection of music and reference materials to Saint John's University in 2001. Some of the material has been added to the Saint John's University collection and can be searched using the library's catalog and the search phrase "Bruce A. Larsen" (include the double-quotes to search as a phrase). The rest of the material is being cataloged in a locally-built database called the Sacred Music Collection.  Richard Proulx's materials were also donated to the library and the "Sacred Music Collection" includes Bruce Larsen's music collection and Richard Proulx's collection of music used as reference material for his own compositions or in his work as a choral/music director. Music in the Sacred Music Collection belonging to Richard Proulx carries his ownership stamp or has the initials 'RP' in the upper-right hand corner. 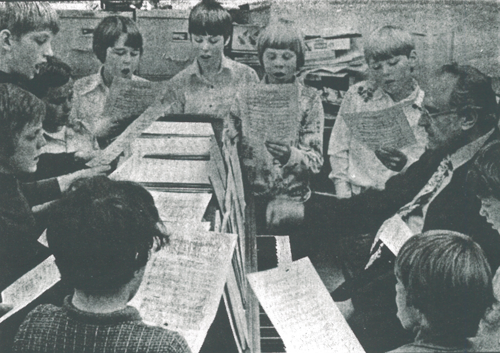 While he chatted with a visitor in his choir room, Larsen toyed with a policeman's whistle on a black cord. When his choir boys got too boisterous during rehearsal Larsen used to pound on the top of the organ console with the palm of his hand. After a few years of this the screws in that panel started popping out onto the floor.

So he got the whistle.

"You know when Bruce reaches into his pocket, that the whistle is coming out," reports Larry Jagoe, a bass. "He'll blow that thing, and a hush will come over the choir."

A bachelor, Larsen has escaped the color-coordinated counsel of women. During a recent conversation he wore a forest green jacket, a lemon shirt, flowered tie, herringbone slacks, mustard socks and well-scuffed loafers.

For concerts, however, he is impeccable in a tuxedo. 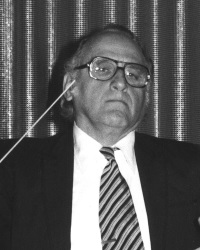