The baseball season is in full force at all levels, from the major leagues to t-ball. “The Matheny Manifesto,” a recent book by St. Louis Cardinals manager Mike Matheny, offers advice to coaches and parents of ballplayers, using his experiences from his childhood and playing career to give invaluable insights and suggestions.

In early 2007, after thirteen years as a major league catcher, Mike Matheny ended his playing career, having suffered a severe concussion during the 2006 season. Matheny spent the summer of 2007 recovering his health and wondering what his future held. In 2008, a group of parents approached Matheny about coaching their youth baseball team which included Matheny’s ten-year-old son. Matheny gave this invitation some serious thought and decided to write a letter to the parents laying out his convictions regarding youth baseball. The letter ended up being five single-spaced pages, which he subsequently read to the parents of the team. Matheny stated that if he was going to coach this team, his main goals would be to: “teach these boys how to play baseball the right way,” to “make a positive impact on them as young men” and to “do all this with class.” After an awkward silence, most of the parents agreed to his terms. The letter eventually went viral and was dubbed “Matheny’s Manifesto.” In the book, Matheny begins with his letter and then talks about the lessons taught and learned while he coached youngsters, how he arrived at his coaching philosophies, and how the values he sought to teach apply to life beyond baseball.

Matheny’s book is divided into three parts: “The Problem,” “A Better Way” and The Keys to Success.” The first part addresses playing sports for the love of the game, the problem with parents, and coaches with complexes. Part two details the expectations and goals he had for his young teams. The third part lists his keys to success: leadership, confidence, teamwork, faith, class, character, toughness and humility. Manager of the Cardinals since 2012, Matheny has a strong Christian faith that is clearly important in his life and coaching career.

Only a very small fraction of the youngsters playing youth sports will ever make a living or even put themselves through college as athletes, but Matheny states that “they can all become better men and women if we can instill in them values they can apply in the workplace, in their homes and families, and in their communities.”  The “nonnegotiable” guidelines Matheny and his board of directors list include a baseball experience focused on the kids, baseball played the right way – with class, biblical truths as a moral compass, a culture of respect from players, parents and coaches, and the parent’s role as a silent source of support. Matheny insisted that his team parents clap but not yell anything when their child was playing. He contends that the yelling – no matter what is said – puts added pressure on the child and takes away the fun. He also advises parents to play catch with their children; they will improve their skills and more importantly, it is time spent together.

“The Matheny Manifesto” is a meaningful read for parents, grandparents, coaches and organizers of youth activities and sports. The old-school advice and principles that Matheny stresses are important and powerful tools that can make a difference in the lives of our young athletes. 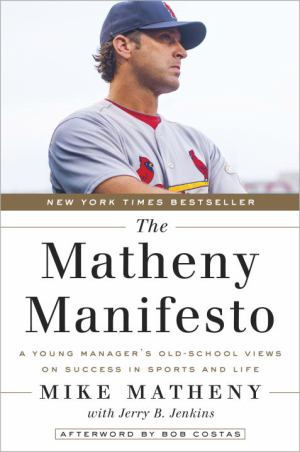