Writing letters appears to be a thing of the past, with cell phones and computers now being the most common ways of communicating with each other. Unfortunately, with the disappearance of written correspondence, many of the activities and happenings of this era will not be recorded as they were in the past. A new book “The Crops Look Good” by Sara DeLuca uses family letters to tell a biography of a Wisconsin farm family from the 1920s to the 1950s.

In 1995, DeLuca, writer and poet, was given a box full of letters that her elderly aunt Margaret had saved throughout her life. Margaret stated that because Sara was so interested in family history, she should have the letters: “You’ll know how to put them to some good purpose.” In the box, Sara discovered letters from her grandmother, aunt, uncle, and mother, all written to “Dear Margaret.” Also in the collection were letters Margaret had written to her husband Mel. DeLuca was overwhelmed with the task of putting the correspondence to “some good purpose.” Almost twenty years later, DeLuca’s book, “The Crops Look Good,” which incorporates many of those letters into a snapshot of Upper Midwest family farming, has been published.

The book begins with a letter written by seven-year-old Helen Williamson (Sara’s mother) to her eldest sister Margaret, who is living and working sixty-five miles away in Minneapolis, having left her Centuria, Wisconsin family dairy farm. The year is 1923 and Margaret is the only one of William and Olava Williamson’s nine children to move out of the area; she misses her family and life on the farm and writes home often. Her mother and sisters write back regularly; her older brother responds occasionally.

The letters Margaret receives from her family chronicle life on the farm from 1923 to 1955. Hard work is the norm; indoor plumbing, central heating, electricity, telephones and television arrive gradually to the Williamsons. DeLuca skillfully adds interesting historical details about the relevant time periods between the letters, along with information explaining some of the events mentioned in the correspondence. Shortly before Helen died in 2010 at age ninety-five, DeLuca showed her some of the letters she had written to her sister years ago. “My goodness! How did I ever find time to write all that trivia!” she exclaimed. Certainly, much of that “trivia” is what makes this book so interesting. Many of the letters tell of daily chores and routines: “Papa and the boys butchered a pig today, so we will have liver tomorrow for breakfast.” Some tell of a particular highlight: “Last week when Papa shipped cattle to the city he brought home ten pairs of shoes. Most of them fit somebody and the rest will be saved for growing into.”

The Williamsons experience sad times, challenges and hardships as most families do, along with plenty of satisfying events and successes, but it’s clear that family togetherness is a very important element in their lives, along with plenty of hard work. “The Crops Look Good” is an incredibly interesting and captivating look into life in the rural Midwest in the first half of the twentieth century when life may have been simpler, but certainly not easier.

In the book’s epilogue, DeLuca states “…memories have a way of shifting and fading, becoming unreliable. Finally, our stories die with us, unless they have been written down.” Her wonderful biography, culled from her family’s written correspondences, is a rich and powerful story.

“The Crops Look Good” is available in bookstores everywhere, including the College of Saint Benedict/Saint John’s University Bookstores. 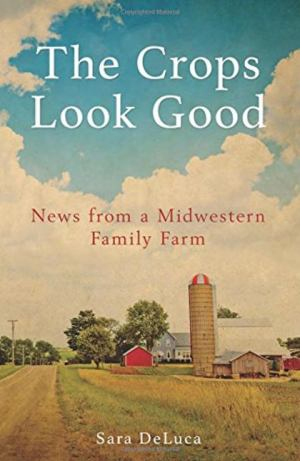