The Heavens Proclaim: Astronomy and the Vatican, edited by Guy Consolmagno, S.J., Our Sunday Visitor, 2009, 231 pp.

The first chapter of The Heavens Proclaim consists of numerous selections from Sacred Scripture that refer to stars. The biblical texts are interspersed with incredible photographs of images from the Vatican's telescopes, reminding the reader of the beauty of the universe.

The book then explains the history that connects astronomy and religion, going back more than 450 years, to the beginning of the Roman College, where studying astronomy was a requirement for anyone pursuing a doctorate in philosophy or theology. It devotes a chapter to calendars and how the construction of the Gregorian calendar was determined. Another chapter addresses the controversy caused by Galileo's discoveries with his telescope, in the early 1600s, when he proposed that the world was centered around the sun, and not the earth.

The Vatican Observatory's story is also detailed in the book, with a number of interesting photographs. The Observatory is now located at the Castel Gandolfo, the Pontifical Villa outside of Rome, having moved from the Vatican when city lights made the night sky too difficult to observe. In the 1970s, further urban growth made conditions at the Castel Gandolfo challenging as well. Eventually the Vatican astronomers collaborated with the Steward Observatory of the University of Arizona in Tucson. This agreement allows the Vatican astronomers to utilize the many large telescopes in the mountains bordering the desert near Tucson, which is considered an exceptional site to view the night skies.

The mid-section of The Heavens Proclaim is devoted to the stars and galaxies, and is difficult for the average person (or the non-astrophysicist!) to read and comprehend. Stellar spectroscopy, classification of stars, galaxy formation and composition, clusters, extrasolar planets, and dark matter are all addressed in this section. Whether or not the reader can follow all the text, the photographs are beneficial and, in many cases, stunning.

Fr. William Stoeger, S.J., a United States astrophysicist, penned the chapter "Is Big Bang Cosmology in Conflict With Divine Creation?" Stoeger states that the philosophical concept of "creation from nothing"--creatio ex nihilo--is a complementary, not an alternative, understanding of the origin of the universe. He explains "Physics can never tell us how we get from absolutely nothing to something." Creatio ex nihilo "provides the ultimate ground of existence and order."

The book includes a number of Papal statements and decrees addressing astronomy, from Pope Leo XIII, the founder of the modern Vatican Observatory, to Pope Benedict XVI. The final section of the book, titled "Questions About Stars" addresses questions such as "Is the universe infinite, or does it have a boundary?" and "Do we know of any other solar systems in the universe?"

According to Our Sunday Visitor, The Heavens Proclaim was published with the hope that it would appeal to the average Catholic to demonstrate that the Church is not opposed to science and, in fact, is very involved in scientific study. With all the spectacular photographs and enlightening text--mission accomplished! 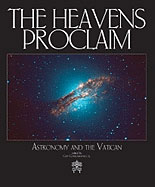