Beginning in 1991, the land management office at St. John’s began to restore a former hayfield along the northern edge of campus to its former state. Based upon Abbey records, this was believed to be tallgrass prairie in the higher areas with wetlands in lower areas along the Watab river. In the prairie areas, about 90 species of native plants were reintroduced, many planted by hand. One of the greatest challenges being faced in the wetland restoration project is the removal of large areas of the introduced reed canary grass. 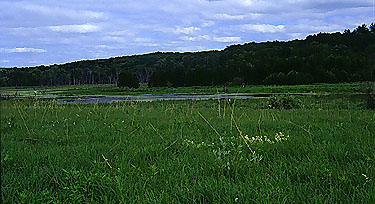 St. John's Campus has a variety of aquatic habitats, including cattail marshes, lakes, permanent and temporary ponds, swamps, and sedge meadows. The University's land management office has undertaken an ambitious wetland restoration project that involves removal of exotic species and reintroduction of native wetland plants. Students are actively involved in the fieldwork associated with the restoration project. Left: This view looking eastward from the St. John's prairie restoration shows a transition from prairie to open water in the foreground and one from open water to deciduous forest in the background.

Above, Left: Duckweed coats a quiet opening among rushes and cattails. Above, Right: A small orchid nestles among the sedges and cattails. Below, Left: A sedge meadow spreads out between the prairie and woodlands. Below, Right: A blue flag iris shows off its beauty among a backdrop of sedges.