How I Finally Caught on to What "Benedictine" Means 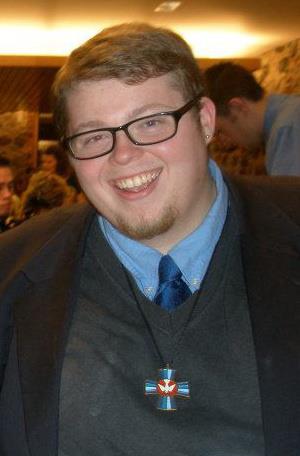 I was dead set on going to Augsburg College in Minneapolis. I had visited the eclectic urban campus a few times during my sophomore and junior years of high school. With each passing month, I became more and more excited to live in a place where plays, poetry readings, and protests happened on a regular basis, where I would finally be in the minority, where I knew I would fit in perfectly, a winter-chapped hand to a fleece mitten.

And then I visited the College of St. Benedict and St. John's University. I felt right at home, though not immediately in a good way. I recognized something about these campuses. Born and raised in rural Minnesota, I had become familiar with fields and small towns. Somebody had planted a dumb idea into my mind: college has to be new and wild, a place where I felt like the tiniest snail in the big lake of life. CSB and SJU was hardly new, certainly not exciting, and did not make me feel small at all.

For some reason I only applied to CSB/SJU. I do not think it had anything to do with the financial aid package or beautiful campus. In retrospect I think it was the Benedictines-mysterious, yet inviting-who drew me to apply, live, study, and pray on their campuses. My completed applications to Augsburg and St. Olaf are still sitting on my desk at home, nothing but dusty relics these days. I was accepted to CSB/SJU and began preparing to spend the next four years of my college career in St. Joseph and Collegeville.

I can pinpoint the exact moment in life when my journey took a turn for the curious and I began to learn that the word "Benedictine" was more than an adjective. I was walking to my 1:00 class in the Benedicta Arts Center on a rainy Friday afternoon in early march. As I passed by the library, the sweetest voice called out behind me asked if I would like to share an umbrella. I turned around to see an older woman wearing a pale pink coat, the hood drawn around the salt-and-pepper hair framing the very face of grace. I smiled and joined Sister Mara Faulkner under her umbrella as we both walked to the BAC for class. When we arrived at the BAC, I asked probably the most forward question in my life: "Will you be my advisor?"

For whatever reason, Sister Mara accepted and took me under her wing as a writer, as a reader, and as a lover of humanity. I have not for one second looked back.

Because of Sister Mara's gentleness and unwavering support, I was eventually able to admit to myself and to others that I have issues with anxiety. While I was perfectly okay with other people dealing with issues of mental health, I knew that I could never be one of those people. Stress hit me sometimes, certainly, but it surely was not an issue of mental health-or so I thought.

I broke down in Sister Mara's office, tears streaming down my face as I explained that I struggled with something more powerful than stress, more insidious than a simple bad day. After spilling everything-the first time I had cried in public-Sister Mara smiled gently and reassured me confidently that mental health was nothing of which to be ashamed. She then quoted Audre Lorde, who has since become my favorite feminist theorist, in saying that "Caring for [yourself] is not self-indulgence, it is self-preservation and that is an act of political warfare." In that moment, the word "Benedictine" jumped down from the ivory tower in which we have placed it and began a gentle dance toward freedom.

Everything suddenly started to make sense. By taking care of myself, I was resisting the world's tendency to over-work, to put product before relationships, to squeeze capital out of everything. The Rule of St. Benedict started to make much more sense to me after I began approaching life with Audre Lorde's credo in mind. The Rule necessarily stands out from cultural convention. With that in mind, it makes sense that our Benedictine Values would also stand out boldly against the contemporary vices that have our culture in a death grip. The Rule calls us to seek counsel from others, to live simply and in common, to welcome all persons as we would welcome Christ, to treasure what we have rather than longing for what we do not need, to value and take care of the elderly and infirm, and most importantly to take care of ourselves and one another.

I learned-and am still learning-that to be Benedictine means to live in the world, all the while working against the dominant and unhealthy tendencies of that world. To be Benedictine means to be countercultural-different, set apart, and consecrated. As I prepare to leave this place, I take a piece of Sister Mara in my heart, confident in the power that comes from self-care, certain in the desire to reform the world in which I live, and ready to welcome all persons-myself included-as I would welcome Christ.