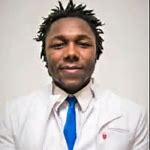 Why Asian Studies?
I wasn't always an Asian Studies major, like most Bahamians at CSB/SJU I delved into the sciences. I was first a Numerical Computation major, and then Computer Science, then Natural Science, somewhere along the line Art came into the mix too.  I then remembered a time a high school when I began to learn Japanese just as a little hobby on the side. However, since The Bahamas is light years away from Japan nobody took me seriously when I said, "I'm going to learn Japanese, and fly to Japan one day." I also remember defending against the xenophobic ignorance a nation based on tourism would hurl towards East Asia, due to the immigrants in The Bahamas.  It was at that moment, I knew what direction I wanted to take off in, and that direction was to the East. The feeling I received from defending something that had value to me, and others was ecstatic.

Cultural studies in general allows for an individual to remove themselves from the tiny bubble they identify as "home" and become one with that of the other, if only even for a moment (which can either be terrifying or eye-opening).  Many Bahamians here at CSB/SJU and in The Bahamas have already conceived the idea of me never returning home, but that isn't the case. I want to be able to return home with the priceless cultural values I would have acquired in that period of time in order to bring the country up to standard in foreign relations.  My nation has an incredible potential for international greatness and recognition, the thing holding us back is the lack of global competence.

Asian Studies has been a gateway for me to expand my knowledge and boundaries around many topics deemed controversial in The Bahamas.  I've made friends from over 8 different countries, learned a slew of historical, linguistic and cultural backgrounds, and my ego has stepped down by at least 5 levels since high school (seriously, ask my high school friends, I was a mess).

About my scholarship:
I'll be at Utsunomiya Grad school for the research and master's but not entirely sure for the doctorate program.  I wrote about the application process on my website: Monbukagakusho Scholarship.