Think You'll Graduate in Four Years from Other Colleges?

THINK AGAIN! The likelihood of graduating in four years from many colleges has become so remote that colleges routinely now report their graduation rate as the percent of students that graduate in six years. Yet many families gamble that their student will be in that ever-shrinking number that graduates in four years. We realize it's easy to take a college's annual cost and simply multiply by four. Unfortunately, it's too often wrong.

In sharp contrast, nearly all CSB/SJU graduates get their cap and gown in four years—meaning our graduates are out earning an income while their friends at other colleges are still working toward their undergraduate degree.

Look up the graduation rates of the colleges you are considering: http://nces.ed.gov/collegenavigator 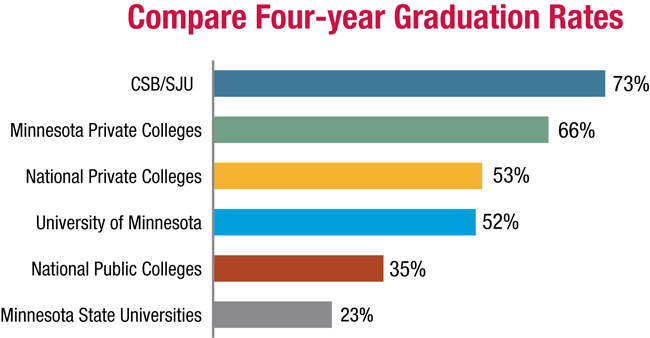