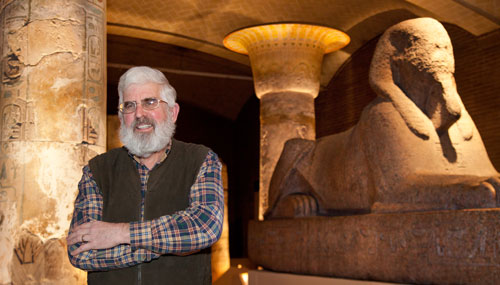 "Uncorking the Past: Alcoholic Beverages as the Universal Medicine before Synthetics-Pros and Cons"
Thursday, December 7, 2017 at 7:00 pm
Pellegrene Auditorium, Saint John's University

The historical development and use of alcohol will be discussed during the 2017 Schirber Lecture.

Author and educator Patrick McGovern will present “Uncorking the Past: Alcoholic Beverages as the Universal Medicine before Synthetics, Pros and Cons” at 7 p.m. Thursday, Dec. 7, at Pellegrene Auditorium, Saint John’s University.

The lecture is free and open to the public. A book signing will follow the presentation.

McGovern is the scientific director of the Biomolecular Archaeology Project for Cuisine, Fermented Beverages and Health at the University of Pennsylvania Museum in Philadelphia, where he is also an adjunct professor of anthropology.

In his lecture, McGovern will take participants on a journey through time to the dawn of brewing. Early beverage-makers likely marveled at the magical process of fermentation. Their amazement grew as they drank the mind-altering drinks, which were to become the medicines, religious symbols and social lubricants of later cultures.

However, fermented beverages also can became the bane of humankind when over-indulged in.  While healthful in moderate amounts, as genetically laid down in the Palaeolithic period and demonstrated by recent medical studies, the widespread availability of alcoholic beverages today, exacerbated by modern mass production, can have serious, even fatal, medical and social consequences.

Over the past two years, McGovern has pioneered the interdisciplinary field of biomolecular archaeology. His laboratory discovered the earliest chemically attested alcoholic beverage in the world (ca. 7000 B.C., from China), as well as the earliest grape wine, barley beer, mead and fermented chocolate beverages.

McGovern has published three books on ancient alcoholic beverages: “Ancient Wine: The Search for the Origins of Viniculture” (Princeton University, 2003/2006); “Uncorking the Past: The Quest for Wine, Beer, and Other Alcoholic Beverages” (Berkeley: University of California, 2009/2010); and “Ancient Brews Rediscovered and Re-Created” (New York: W.W. Norton, 2017).