Gary Eichten will moderate an event with Nick Hayes, St. John’s University President Michael Hemesath, and director of the Museum of Russian Art Vladimir von Tsurikov for a conversation on the legacy of the Russian Revolution in regards to politics, economics, and Soviet history. The St. Ben’s and St. John’s Alumni community is welcome and it is open to the public. This will take place at the Museum of Russian Art. The presentation is at 7:00 pm.

A conversation on the turbulent state of affairs in Russia will launch a new campus program, "On Campus with Gary Eichten." The featured guest was Nick Hayes, professor of history and the University Chair in Critical Thinking at the College of Saint Benedict and Saint John's University. January 21, 2015. 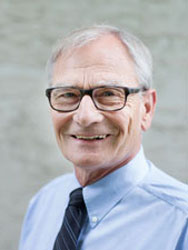 "On Campus with Gary Eichten" enlists the talents of the award-winning host with nationally known speakers and the best of faculty members from CSB and SJU. The goal is to engage the public in key issues of our time approximately four to eight times a year.

MPR News Editor-at-Large and retired program host Gary Eichten held several positions during his 40-plus-year career at Minnesota Public Radio, including news director, special events producer and station manager. He served as anchor for Minnesota Public Radio's live, special events news coverage and anchored all of the major news programs on Minnesota Public Radio, including Midday, which he hosted for more than 20 years. A graduate of St. John's University in Collegeville, Minnesota, Eichten began his career in 1967 in Collegeville as one of Minnesota Public Radio’s earliest employees.  Among the honors Eichten has received is the Corporation for Public Broadcasting award for best local news program. In 2007, he was inducted into the Minnesota Broadcasters Hall of Fame.  Eichten was also awarded the prestigious 2011 Graven Award by the Premack Public Affairs Journalism Awards Board for his contribution to excellence in the journalism profession.

Our events are co-sponsored by the Eugene J. McCarthy Center for Public Policy and Civic Engagement, serving students of CSB and SJU, and the University Chair in Critical Thinking.