In 2001, the College of Saint Benedict received a commitment to establish its first academic chair, the Koch Chair in Catholic Thought and Culture. The gift, the largest in the school's history, was donated by CSB Board of Trustee member Barbara "Babs" Gray Koch and her husband David Koch of Long Lake, Minn.

The Koch's share a long history of business, community and philanthropic achievement. Graco, Inc., was founded by Babs' father and uncle, Leil and Russell Gray, to manufacture and sell grease guns. Today's Graco, with the help of nearly 2,000 employees, manufactures and distributes high-tech fluid dispensing systems for the industries of the 21st century. Babs' husband David has been a leading force in the corporation for 40 years.

Both Kochs have been honored numerous times for their philanthropic and volunteer commitments. Their family foundation, Greycoach, contributes to Catholic organizations which focus on spiritual formation, social welfare and educational goals. Their personal giving has also included a wide range of human welfare, youth development, wildlife and animal welfare causes.

Babs and David have led the way as fund-raising volunteers as well as donors. They have both been acknowledged for their excellence as campaign leaders. Beginning in 1997, Babs served as the chair of the Resource Development Committee for the College of Saint Benedict. 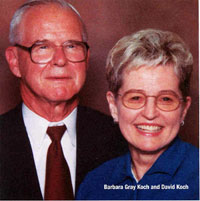