The Catholic intellectual tradition has developed over the centuries and has long held that truth is too vast for any one expression to fully encompass. It is a treasury of scriptural reflection, drama, literature, poetry, music, systems of philosophy, norms for living, as well as art, architecture, and science. It forms the whole person rather than the intellect alone. Catholic thought and tradition are always a potential aspect of our discussions and of our scholarly activities. They are carefully examined where they have a bearing.

As participants in the Catholic intellectual tradition, our schools are animated by a sacramental awareness of the ways in which the divine is manifest in the created world; in history, ritual, and imagination; and in the human heart. CSB and SJU extend an ecumenical hospitality to all who enter the intellectual community open to conversation with the Catholic Benedictine tradition. Catholic thought is not a perspective into which students are indoctrinated, nor are faculty limited in their academic freedom of inquiry and expression. To the contrary, the integrated perspectives of faith and reason enrich our pedagogy and scholarly discussions.

Those who stand in other faith traditions are no strangers here and are cordially invited to be witness to the truth as they see it. Likewise, we welcome those who do not consider themselves a part of any religious tradition, but who devote themselves with passion and integrity to their disciplines and to a transformative education of their students. 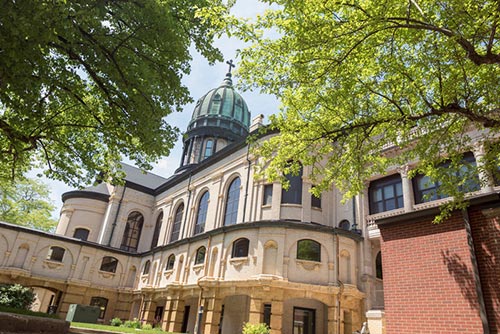 There are several ways in which the Catholic identity can be seen in our institutions: